Hi! I’m Donát Gerencsér, a student at Budapest Centere of Economic Vocational Training BGSZC. My school is participating in an Erasmus+ project, which is called „Social Entrepreneurship between European Schools”. This project has several activitys in different countries. The first activity (for the students) took place in Torremollinos, Spain. We spent a beautiful and very useful week in Spain, so let me sum up my thoughts, impressions and ideas about this week.

In the morning, we met the students from other participating countries. We took pictures with the national flags and we started to make friends. An hour later, we started a workshop about self- employment vs. social business. We shared our thoughts about the advantages and disadvantages, of both business forms. It was really exciting to hear other teenagers’ ideas about business.

After this workshop, we had a coffee break. This break is a really social event in Spain. All of the students went (maybe the “ran” word would be a better expression) to the courtyard to play basketball, football or just to chit-chat with their friends. I had to introduce myself to almost everyone, but it was interesting to speak 1 or 2 sentences to a lot of people. I’m pretty sure, that I’ve made many more friends in this 15 minutes than at home during a month or a longer period 😀 .I was really happy, that the Spanish students were so friendly, so I couldn’t feel that I was lonely.

Then, we continued the workshop, but the topic was a bit different. We had to make a CANVAS. It’s a business planner help or something like that. If you are about to start your new business, this thing helps you to define your key partners, key activities, channels, key resources, etc. At the beginning, we spoke about things in general, and afterwards, we created teams and we made our business’s canvas.

This day was very useful, we could get an insight into the start of a business project. I was a bit tired after this, but I have to say, that this day was really worth all the energy.

We said goodbye to the day in the company of the workers of Andalucía Emprende.

Many thanks to them!

Our first stop was the “Alhambra”

This is a palace and a fortress complex. It was originally constructed as a small fortress in AD 889 on the remains of Roman fortifications, and then the building was largely ignored until its ruins were renovated and rebuilt in the mid-13th century by Nasrid emir Mohammed ben Al-Ahmar of the Emirate of Granada, who built its current palace and walls. It was converted into a royal palace in 1333 by Yusuf I, Sultan of Granada. After the conclusion of the Christian Reconquista in 1492, the site became the Royal Court of Ferdinand and Isabella (where Christopher Columbus received royal endorsement for his expedition), and the palaces were partially altered in the Renaissance style.

The view and the feeling were indescribable. (By the way Alhambra is a UNESCO World Heritage Site, so maybe that’s the reason why, :D)

After visiting this beautiful place, we continued our trip to Parque de las Ciencias.

Here we saw an exhibition about the human body, watched a special bird show and in the Planetarium we learned, how the stars ‘work’.

And at the end of the day, we climbed “Mirador de San Nicolas” to take some beautiful pictures from the Alhambra.

In the afternoon, we participated in a programme called Financial Education. This was organised by the Edufinext team.

We learnt a lot about financial things like investments, loans etc. and how they work. We had to answer questions, for this we needed a little competitive spirit.

After the presentaion, we heard a lecture about the Andalusia Technological Park (PTA) and the development of this engineering enterprise as a successfull entrepreneurship case.

Later, we had an awesome snack time on the rooftop of the company’s building.        Many thanks for that also! 😀 .

In the afternoon we went to Museum Pompidú, which is a modern art museum. It was pretty great.

When we finished the guided tour, we took some pictures in the port of Málaga. The sunset was just incredible.

Thursday was the day of the workshops.

We had an E-twinning and Radio Podcast workshop with a Spanish teacher called Alfonso. It was really useful, I hope that we will use these skills in the future.

After these activities a really elegant guy came, and he spoke about the importance of golf in the sustainable development of the Costa del Sol.

He asked us, if  we liked golf? We replied by saying maybe or no. His answer was: We will see that this will change after an hour of golf.

So, in five minutes we were on the way to the golf centre. We tried to do our best on the fields.

For lunch, we got a traditional Spanish food called paella. It was really tasty.

In the evening we could cheer for Basket Unicaja. This basketball match was really exciting even if Unicaja lost. I have to say, that Spanish people can cheer very well! :D.

We spent our last day in Málaga and visited the Polo Digital ( a place for young programmers), the Museum of Málaga, and the Acazaba (Málaga’s fortress).

We had a pretty great time in Spain. We learned a lot about business and financial issues. I think that this project was very useful for teenagers and this week also proves that. I’m really glad, that I could participate in this project. 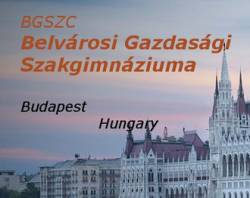