M1 Spain Conference: “Connection of the educational system with the business world: the need to promote an entrepreneurial culture”.

M1 Spain Conference: “Connection of the educational system with the business world: the need to promote an entrepreneurial culture”.

On November 8, 2017, the Unicaja Financial Education Center hosted the development of the round table Connection of the education system with the business world: the the need to promote an entrepreneurial culture, organized by the Edufinet Project, promoted by Unicaja Banco and the Unicaja Foundation, together with ECIE (European Center for Innovation and Entrepreneurship) and DTSE Project. 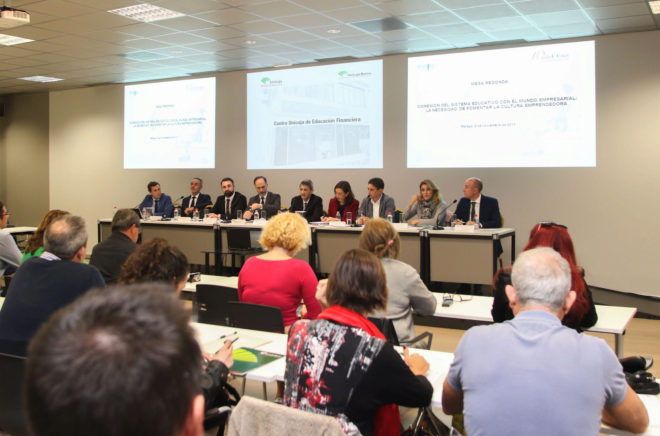 This conference was broadcasted to our colleages using Skype Tecnology.

This conference was Moderated by Alfredo Chávarri, General Director of Andalucía Económica, he had the participation of a wide and varied list of representatives of different groups:

Some subjects that were Discussed in this conference were

1) Discuss the causes of youth unemployment, as well as the role played by educational systems in this problem;
2) Analyze the trend environment in order to glimpse the competencies that future jobs may require;
3) Identify the possible studies and the competences that can facilitate a greater professional output;
4) Carry out a comparative analysis of the degree of entrepreneurship among different European societies;
5) Define strategies to promote an entrepreneurial culture as an alternative to youth unemployment and as a driver of economic and social progress

Our project DTSE  has appeared in the most important News Agency in spain Europa Press, thanks to Edufinet Educational Foundation , UNICAJA and collaboration with the ECIE Center in the round table called “Connection of the educational system with the business world: the need to promote an entrepreneurial culture”.

From this lines we would like to thanks this article¡